There is a big difference between election fraud and voter fraud.

While many of us use them interchangeably, they are not the same.

Voter fraud is when a person or small group of people find a way to de-fraud the process in the act of voting.  An example of that would be a forged ID, registering more than once using variations of a legal name or registering in more than one state and voting in all of them.  That is a voter or voters doing something individually that is unlawful. 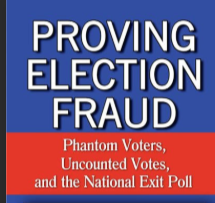 Election law is a whole different ballgame.  It has the edge on shifting election outcomes.  You may remember in 2018, on the Wednesday after the elections in November, we all went to bed feeling that one party, that was ahead in every race by thousands of votes, were the winners.  After-all, the tabulation of the votes had been underway for more than two days.  Alas and to the chagrin of many voters, the following morning, the opposite party won most of the critical seats.  When you think about it, it’s probably statistically impossible to have a reversal that big.  The opposition party had moved ahead overnight by thousands of votes.

That is likely election fraud.  Just recently, an Arizona state senator reported finding a box of voted ballots from that election in her neighborhood.  However they got there, it was probably election fraud.  Boxes of voted ballots are supposed to be secured until sealed and stored. When we see hundreds or maybe thousands of post-election ballots suddenly appear – or disappear, when you see voter rolls with dozens of active voters over 110 years old, when you have, as has happened in Arizona in the 2020 Primary, voters who put in writing to the Recorder’s office to take them off early ballots but early ballots show up in their mailboxes anyway… these are all examples of election fraud.

What can you do to stop fraud that might be occurring?  Two things:  You can sign up with us and help  unearth and then find remedies for what could well be election fraud on a grand scale.  Just click here to get more information how you can help change the downward trajectory Arizona is on regarding election integrity.  Second, you can donate by clicking here.  As a non-profit, money is always hard to come by but it takes money to force change through the courts.  Donations of any amount is the only way for us to keep going.  Small recurring donations of $10 or $15 really adds up for us.

Stop voter fraud and election fraud in its tracks!  Find out how HERE (link to sign up page on our website)